The 30 year-old Leicester Tigers player who can play both Wing and Centre positions, has a proven track record scoring 12 tries in 18 Premiership matches last season and a bright future with the team. Many of Nylacasts’s material qualities are reflected in Goneva, with his speed, stability, toughness and high impact strength. Nylacast, with their international headquarters and manufacturing facilities based in Leicester, are proud to sponsor Goneva and support the Leicester Tigers, wishing them the best of luck in the 2014/2015 Rugby season.

For more information about the player Niki Goneva please click here. The Tigers first game of the season will be at their home of Welford Road, Leicester will commence on Friday 29 th August at which the new Nylacast Nyla-Hero stadium banners will also be on show, and first AVIVA Premiership Rugby match on Saturday 6 th September against Newcastle Falcons. On behalf of Nylacast, we would like to wish all the team the best of luck for the next season 2014/15. 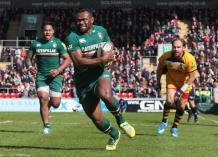