Nylacast Shortlisted for Made In Midlands Awards

Headquartered in world famous Leicester, a city renowned for achievements on and off the pitch, engineering firm Nylacast are unveiled as finalists for the 2016 Made in Midlands Awards.

With a high focus on continuous improvement, Nylacast are hoping to be crowned winners for two categories at the awards. The Apprenticeship & Training Award recognises the manufacturing businesses which have pioneered in furthering the cause of Apprenticeships in the Midlands. Having launched a dedicated engineering academy in 2014, Nylacast today train over 16 apprentices, 6 graduates, multiple members of the staff and event school students during their holidays.

The Large Manufacturing Company Award is aimed at celebrating the achievements of companies based in the region with a turnover of over £25m. With strong growth in domestic and international markets, Nylacast as a company produce engineering solutions in Leicester which are shipped to over 43 countries across the globe and recognised to increase the performance, safety and efficiency of customer products and projects in many key industries.

Should the engineering firm with the Apprenticeship & Training Award it will be a history making hatrick of awards for the company, having won the accolade in both 2014 and 2015.

Nylacast Marketing Manager, Junaid Makda commented, “British manufacturing has kudos worldwide and is certainly something which should be celebrated in a region known for its manufacturing roots. Nylacast are delighted to be attending the awards and look forward to supporting and meeting all finalists and companies at the event.”

Taking place at the Birmingham Metropole Hilton on the 11th of May, the Made in Midlands Awards aim to recognise and celebrate the success of manufacturing within the region. The winners of the regional awards will be put forward for the national Made in the UK Awards which take place later in the year. 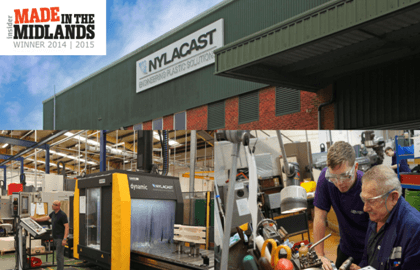