For the first time ever, Nylacast hosted a Charity Auction which received fantastic attendance by employees, friends and family and a variety of local businesses and raised a substantial amount for Leicestershire Cares, which was followed later that month by a Family Fun Day held in support of Rainbows Children’s Hospice.

The Charity Auction event focused upon raising money for the 2014 ‘Toys on the Table’ project which concentrates on providing vulnerable children in the local Leicestershire area to receive new toys and gifts at the holiday season who might otherwise not receive anything and collected an impressive £3000 which was presented to local charity Leicestershire Cares.

Following that success, Nylacast proceeded to hold a Family Fun Day which raised an outstanding £1,300, presented to Rainbows Hospice, whilst also provided a day out rewarding their hardworking teams and their families.

Rainbows Hospice were present on the day promoting their #RainbowSelfie campaign in celebration of their 20 year anniversary and to raise awareness of their hospice, of which offers a place for children and young people to be cared for and supported.

Group CEO, Mussa Mahomed commented, “Charity and community development has always held importance in my eyes, and is absolutely wonderful to see this is the case with many of our colleagues and team members here at Nylacast who worked in unity to organise two great charity events”.

Nylacast are very proud to have been able to raise a significant amount for both the charities and hope that the efforts will help make a difference to those people in need, especially as we head in to the frosty festive season. 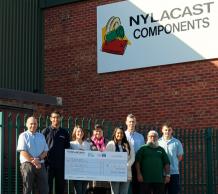