In Leicester over 1000 families and single people spent time in a hostel during 2012-2013 and saw the highest number of people sleeping rough of all the places in the UK outside of London. The recent closure of several hostels and shelters has furthered the struggle facing those without a home. Fundraising for the second consecutive year for the cause, the teams at Nylacast raised 3 pallets of starter packs including bedroom, toiletry, and family packs as well as over 40 food packs.

Group HR Manager, Ian Mallabone commented, “On behalf of the company, Leicestershire Cares and the chosen charities, I would like to say a huge thank you to all those who have contributed to such a worthwhile cause. The generosity of the Nylacast employees is overwhelming, having collected over 70 starter packs, which will help a number of families and individuals across the county.”

Every pack raised over the last few months will make a valuable contribution to helping those who are settling in to new homes, in providing for their basic needs and make for a more comfortable winter. In cooperation with organisations The Bridge and STAR, Leicestershire Cares will ensure the donations are received by vulnerable families and individuals in need, throughout the local area. Nylacast would like to thank all that donated to the Collect4Chrsitmas appeal and encourage other local companies to join Leicestershire Cares and get on board with their great local projects and campaigns. 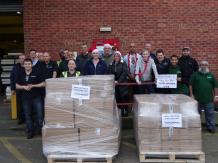