As part of their health and well-being initiatives Nylacast who employ over 430 team members in Leicester conducted a variety of activities during their March cancer awareness month in support of local charities.

Every two minutes someone in the UK is diagnosed with cancer. Breast, prostate, lung and bowel cancers together accounted for over half (53%) of all new cancer cases in the UK.1
Supporting three trailblazing charities in the fight against cancer, engineering firm Nylacast marked March as their cancer awareness month forming part of their wider health and well-being initiatives across the company whose world headquarters are in Leicester.
Members of the Nylacast team attended to numerous cancer awareness workshops and seminars held in partnership with PROSTaid, Bowel Cancer UK and Birstall Bags during the month who provided functional help and advice on prostate, bowel and breast cancer cancer, their early signs and symptoms and the wider support network and resources available on a local level.

Further fundraising activities took place across the company which included bake and cake sales and March Hair sponsorships for PROSTaid whereby 17 team members grew beards and moustaches and shaved heads to raise awareness for the charity. Saturday 30th March saw over 100 Nylacast staff, friends and family participate in a 5k Step up to Cancer fun run and walk in Watermead Park, just a stone’s throw away from the company’s facilities in Thurmaston.

Through the many activities organised to raise awareness of cancer, the company collectively raised £3,000 which was presented to representatives from each charity at PROSTaid’s BIZZ BUZZ speed networking group, which will be hosted at Nylacast World Headquarters on the first Wednesday of each month. The BIZZ BUZZ networking event was created to help local businesses work together whilst raising awareness and proceeds for the charity.

On receiving their donation, Rob Banner from PROSTaid commented, “We are over the moon about the support that Nylacast have given in just one month, their efforts fundamentally raise awareness of the cancer and the proceeds of their many fundraising activities helps towards funding the local support groups and nurses which are key to our fight against the cancer. We are also overjoyed that Nylacast have opened up their facility to host our monthly BIZZ BUZZ event bringing together local businesses for a great cause.”

Rosie Holudsworth from Birstall Bags, a breast cancer support group in Birstall, Leicester said, “This donation and the cancer awareness seminars Nylacast has held means the world to me, it is all for an excellent cause aimed at improving health services.”

A representative from Bowel Cancer UK commented, “We are proud of the organisation and the efforts they took to raise the awareness of bowel cancer amongst their workforce, family and friends during March. We have received great support from Nylacast and the seminars we put on were very well attended”. 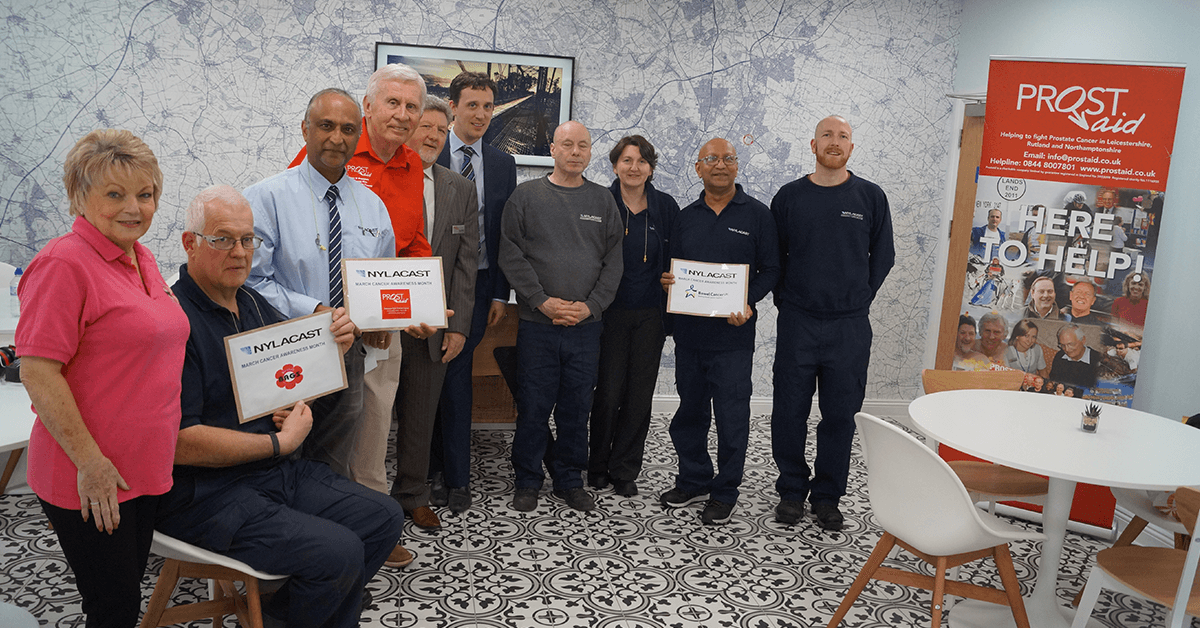