As a UK manufacturer supplying engineering solutions worldwide, Nylacast proudly announce the establishment as official sponsors of the Great Britain Women’s Rafting team. The women’s GB rafting team, based in Nottingham and Wales have been representing their country since 2005 and have so far earned themselves fourth place in the 2012 European White Water Rafting Championships and are currently World Sprint Champions, ranked 5th overall in the World (New Zealand 2013).

The team hopes to continue their success this year, and Nylacast are proud to support their ventures. Recent success at the National Selection event at the Cardiff International White Water Course saw the squad secure the top two GBR team places, meaning that they will be sending two teams to the European Championships in Slovakia this July and the winning team to the World Championships in Brazil this August.

The two teams consist of; Nerys Blue, Georgina Preston, Bryony Devoy and Naomi James in one boat, and Fran Kohn-Hollins, Suzie Jackson, Sophie Ward and Lowri Davies in the other. “It’s wonderful to see such a highly motivated team who make tremendous effort to fit in regular training around their day to day jobs and professions. The partnership with GB rafting works hand in hand with Nylacast’s range of polymers, both performing outstandingly well in harsh, arduous environments. Nylacast are elated to sponsor the GB Rafting Team and are delighted to have such a dedicated team represent Great Britain in numerous competitions” commented Junaid Makda, Nylacast Marketing Manager.

The unforgiving environment of white water rafting aligns itself well with the industries and environments in which Nylacast materials and components are utilised. Nylacast engineered plastics that are ideal for use in salt water, have exceptional resistance to wear and corrosion, as well as being lightweight – typically 1/7th the weight of steel, adhere to requirements of such a sport, and as a company, identify with the continuous effort to develop and improve.

GB Rafting Team member Georgina Preston commented, “The Nylacast sponsorship will enable us to compete at the highest level this year – the World Championships in Brazil, which is just incredible. Where we would normally struggle to save enough for flights, accommodation, training and the entry fees, this has given us an opportunity we otherwise may not have had. We are proud to be working with Nylacast who support and maintain strong links with the local community, and who share the same core values as ourselves. We are really looking forward to a long relationship where we can offer back some of our support to the Nylacast family!”

Some of the Nylacast employees were lucky enough to get first-hand experience of the tough terrain at a recent raft racing weekend in Matlock, Derbyshire. Despite the chilly weather the team had a fantastic weekend and would like to thank all the GB team members for taking the time out of their busy training schedules to do this, and would also like to encourage other companies and local communities to support the team into their important upcoming races. To keep up to date with the Women’s Great Britain Rafting Team’s News, Events and Success please follow them on Twitter and Facebook. 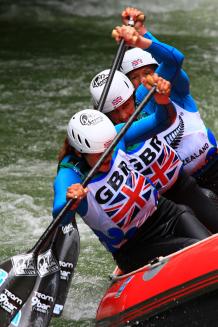