For the second consecutive year Nylacast has been placed on the Sunday Times HSBC International Track 200. Published on 11 June 2017, the league table ranks Britain’s mid-market private companies with the fastest-growing international sales.

With its global headquarters located in Leicester, Nylacast was one of 20 companies based in the Midlands to be placed on the league table. The combined international sales of the ranked 20 Midlands companies have grown by an average of 47% a year over the last two years to a total of £221m, and together they employ more than 6,200 people.

The league table reflects the importance of Europe to Britain’s mid-market exporters ahead of the Brexit negotiations. Almost 85% of the companies (167) sell to the continent, the most popular market, followed by North America (112) and Asia (75).

The International Track 200 is sponsored by HSBC and DHL Express, and compiled by Fast Tack, the Oxford-based research and networking events firm.

Amanda Murphey, UK head of commercial banking at HSBC, commented: “This year’s Sunday Times HSBC International Track 200 is testament to the exciting opportunities available to ambitious UK businesses with appetite to grow their goods and services abroad. The 20 companies n the Midlands are putting the region firmly on the map as a thriving business hub.” 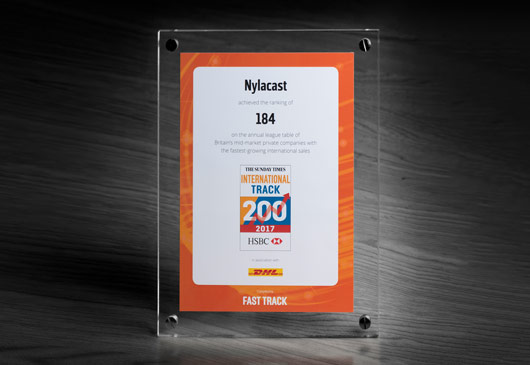