Nylacast is backing a world class British team of female white water rafters with a package of support and sponsorship to help them compete at the top level all over the globe.

It is the second year running that the Great Britain Women’s Rafting Team, based in Nottingham, has won support from Nylacast, whose headquarters are in nearby Leicester.

Formed in 2005, the rafting team earned fourth place in the 2012 European White Water Rafting Championships as well as having a very successful year last year in the IRF European Championships where the team performed better than ever before, returning with a series of well-earned gold, silver and bronze medals. This year the team have high hopes to make the podium when they take on the World Championships in Indonesia.

Georgina Preston a member of the GB Women’s Rafting Team, said: “White water rafting is such a great sport as it builds strong bonds between team members. We all have to rely on each other for safety and trust each other quite literally with our lives which has made us all the very best of friends. We really appreciate this association and support from Nylacast and the money will be put to good use to help with flights and accommodation as we compete all around the globe!”

The seven strong team race on extreme white water, battling in head to head competitions in races of up to an hour in length. This year is set to be a very busy year for the team with the European Championships in Bosnia coming up this month and the World Championships in Indonesia later on in the Winter. The team are also making efforts to encourage young women to take up white water rafting with training sessions for the Youth Rafting team for Girls which features girls from as young as 16.

Junaid Makda, Nylacast’s Marketing Manager, said: “We are delighted to be able to support a dedicated team representing Great Britain around the world. There is a strong parallel between the materials we develop, which have to cope with arduous conditions such as offshore drilling, and the challenges of white water rafting. We think this team is thoroughly deserving of our support as they are trying to compete at the highest level with minimal funding. We’d like to encourage other companies to provide sponsorship and for the public at large to give them the support they deserve.”

A member of Nylacast’s Material Sales Department, Sonia Dehal presented the cheque during the day and said: “I think it’s great that we could support such a fantastic team of inspirational women. Like the world of white water rafting, for many years engineering has been a particularly male dominated industry and I think it’s important to encourage UK women to take a chance on something they’ve never tried before whether that’s white water rafting or a career in engineering.”

The sponsorship from the international engineering company is aligned perfectly with the industries and environments in which Nylacast materials and components are utilised. Nylacast’s lightweight engineered polymers are ideal for use in fresh or salt water with exceptional resistance to wear and corrosion.

Founded in 1967, Nylacast has more than four decades of experience in the development of engineered polymers. With continuous investment in R&D, Nylacast is regarded as a world leader in the development of engineering polymer components. This level of experience, combined with the ability to produce rapid prototypes and complex one-off components has seen Nylacast involved in a number of collaborative projects with blue chip organisations such as JCB, Caterpillar, Mercedes, Fiat and Volvo.

Nylacast exports 70 per cent of its output. It employs more 400 people at two factories in Hastings Road and others in Thurmaston Boulevard and St Barnabas Road, in Leicester, and also has bases in the USA, in Texas and Pennsylvania, and South Africa. 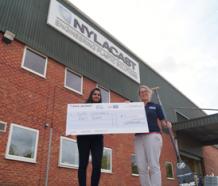