Flying Fish a Success at Nylacast!

Flying Fish have recently had 2 young people, Luke and Zabi, successfully complete work placements at Nylacast. On completion of his placement, Luke was recommended for the apprenticeship programme and was successful! His feedback was very positive, with all interviewers impressed with his positive attitude to work and desire to achieve. Luke’s advice to other young people doing a work placement is “be confident and willing to learn”. Ian Mallabone, HR Manager at Nylacast, said “Luke had a fantastic attitude, he’s a good role model to other young people and no job was too much. He was always happy to help and enthusiastic which showed throughout the recruitment process for the apprenticeship”. Luke said of his placement, “If I had come here a few years ago I would have not taken part or done so well, I am now ready to make the change and know only I can do that.” This opportunity gave Luke the platform to showcase his abilities and he particularly excelled as the team at Nylacast helped him believe he can. Zabi, on successful completion of his placement, is now also going to be approaching agencies for work using the positive reference letter sent. He said of his placement, “I now have a better understanding of what to do at work, it has helped build my confidence. I was scared I would not be able to do the work but I now know I can work.” Congratulations to Zabi and Luke. 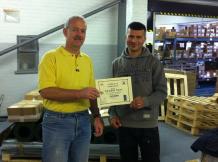