Charity event is a resounding success for Nylacast employees within the local community.

On the 26th March 2010 Nylacast staged a charity football game which saw a Nylacast select 15 verses a local club team Allexton & New Parks in aid of charity. The result was a very hard fought 4-4 draw which was the right result. During the event, Nylacast raised in excess of hundreds of pounds towards a newly formed disabled team which one of our members of staff has been trying to set up for some time. Thanks to the event and the commitment and representation Nylacast have helped contributed to this start up team and would like to thank all our stakeholders involved for their support. 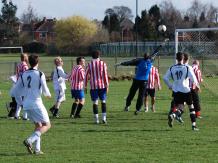