Nylacast was recently named Large Employer of the Year Award at an apprenticeship graduation event hosted by the Leicester City Council’s Apprenticeship Hub.

Judges gave the award, sponsored by IBM, for Nylacast’s commitment and contribution to its apprenticeship programme, including setting up its own academy, and the success that apprenticeships have brought to the company.

Apprentices from the firm joined hundreds of others at the graduation ceremony at De Montfort Hall, Leicester.

The ceremony was held congratulate and reward students on the success of their achievents as well as raising the profile of apprenticeships with a message that a higher or advanced qualification is on the same level as a university degree.

Ian Mallabone, Nylacast Group HR & Training Manager, said: “The event was a very proud moment for all our staff and, of course, for our apprentices. To watch our apprentices take part in a ceremony similar to that of a university graduation was rewarding, and to win the award for ‘Large Employer of the Year’ just topped the day off. The apprentice scheme is vital to our business, and it is great that we have been recognised for this.”

Proud Nylacast apprentice Dale Bartram said: “It is great that apprentices are being awarded and promoted in the city and that we are given a graduation ceremony similar to that of university students. Apprenticeships are a great way to achieve qualifications as well as experience. They offer an easier way to get into a working environment than going from college to university without understanding the workings of a business, and university is not always for everyone.”

Another Nylacast apprentice who graduated, Abdur Limalia, commented: “Nylacast’s apprenticeship programme gives you a great insight into engineering and provides all the necessary training needed to progress further in the future. The graduation ceremony gives everyone a sense of achievement and makes us feel equal to academic graduates.”

The Nylacast apprentices were congratulated on stage by Leicester City mayor Sir Peter Soulsby, as well as Colonel Murray Colville, Vice Lord-Lieutenant of Leicestershire. Speakers included Geeta Pendse and Dominic Heale from BBC East Midlands Today and Melody Hossaini, a social entrepreneur who made it to week ten of BBC’s The Apprentice. 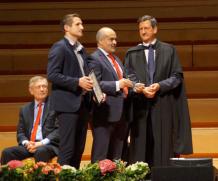