Sponsored by Leicester College, The People Development Award acknowledges organisations that demonstrate excellence in the promotion and implementation of a learning and development culture.

With a predicted 96,300 new engineers, scientists and technologists needed to replace the retirements in the industry by next year, Nylacast have shown real commitment to helping to bridge the UK Skills gap and create engineers of tomorrow with the launch of many successful initiatives.

The company, which has headquarters in England and facilities in South Africa and the United States, has pushed the boundaries of conventional people development with the launch of a successful Engineering Training Academy last year which works alongside their multi-award winning apprenticeship scheme which is now in its fifth year.

With a workface of over 400 employees, the firm believe in the importance of rewarding the loyalty of long serving and dedicated employees with structured training programmes and opportunities to further their knowledge and gain qualifications.

Marketing Manager, Junaid Makda, says: “At Nylacast, people are regarded as one of the most valuable and important assets within the business and we believe in giving people the autonomy to add value within their own roles. Here at Nylacast, we are regularly investing in state of the art technology as part of a continuous development plan, however within this plan the development and investment takes priority.”

Numbers of participants in the company’s popular apprenticeship programme have grown year on year and with plans already underway to recruit more trainees this year, the firm are hoping to help more young budding engineers realise their goals.

The company currently has 16 apprentices in its academy with a number of graduated apprentices now in full time employment within the business.

In January 2015, Nylacast launched its graduate training programme, taking on four engineering graduates to study a four-year course encompassing all elements of engineering from design to production and quality. The company is also working to increase awareness of engineering in schools, colleges and communities.

Mussa Mahomed, Nylacast Group CEO, said: “Each of our employees brings individual skills and qualities that we can build on, and we are so pleased with the success of our training programmes in developing people. In a world where technology is constantly developing, it is important to remember that without skilled and trained staff the purchase and use of new technology would be deemed futile.”

This award win is the latest in a string of award successes for Nylacast, who earlier this year won the Apprenticeship and Training award in the Made in Midlands awards for the second year in a row. The firm were also shortlisted in the Made in the UK Awards were named as International Employer of the year by Leicester City Council. The firm are also hoping for yet more good news at the upcoming Plastics Industry Awards where they are in the running for the Best Training and Development Programme award.

Nylacast is not only committed to people development in their sector but also to helping to develop people in the sports world through their sponsorship and support of many local and national teams including Leicester Riders, Leicester Tigers, DMU Racing, Leicester Lions, MD Racing and Women’s GB Raft Team. 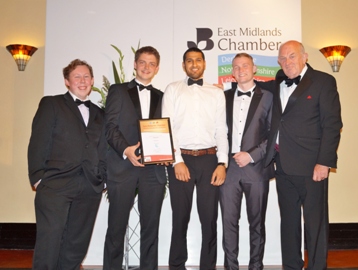